Last week Levon ran into the kitchen and asked, “Was Martin Luther King, Jr. a president?”  Levon is five.  He knows MLK was an important leader in our nation’s history, so it seems reasonable in his mind that someone that important was president.

Until recently the fact that Presidents Day fell during Black History Month was either ironic or irrelevant.  But now, in the minds of children that never knew a world before we had a black president, perhaps this coincidence seems appropriate. 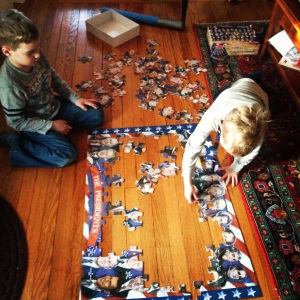 In honor of Presidents Day, Paxton and Levon asked questions like, “How many presidents have been shot?” and “When are the presidents’ birthdays?”  All questions easily answered with a quick Google search.  They also asked, “Why can’t Dada be president?…Why can’t you be president?…”  That last question was followed with this observation, “There haven’t been too many women presidents.”  I told them we may soon have a woman president.  Which lead to a brief discussion of Hillary Clinton.  Still my mind is drawn back to Levon’s question about MLK.

For Presidents Day we again completed the jigsaw puzzle depicting all the US Presidents.  Maybe this time Pax and Levon will internalize the fact that all 43 faces preceding Barack Obama were white.  (Also, as just clarified, all male.)

Recently I’ve had a chance to reflect on Ossining’s events honoring the 50th Anniversary of the March on Washington.  My brother Barrett Hawes is an editor, and he just completed this short video of highlights that I asked him to create.  Recognizing local voices discussing civil rights—what a perfect way to celebrate Black History Month.

On the second night of events honoring the historic march, the Ossining Documentary & Discussion Series hosted a screening of Brother Outsider, a film about Bayard Rustin, the march’s organizer.  Panelists Walter Naegle and Denis Parker were excellent.  Walter Naegle was Bayard Rustin’s partner and recently accepted the Presidential Medal of Freedom on Rustin’s behalf.  Denis Parker is the director of the ACLU Racial Justice Program and he lives in Ossining.

The speakers and panelists that participated in the two days of events honoring the March on Washington demonstrate the wealth of intellectual and impassioned people who live in Ossining.  I felt great pride when my brother watched the event footage and was thoroughly impressed by the number of interesting and charismatic voices in our community.  Barrett spends much of his work day trying to make celebrities and reality tv “stars” seem interesting and charismatic.  For him it was refreshing to have the challenge instead be to select only highlights from great material.

There are many heroes to celebrate during Black History Month.  Since I’ve spent a good part of the last year reading MLK’s work, I will end a bit of wisdom from him.  Like all his statements, it holds true today.  And it is one of the biting quotes that dispels the softer gentler version of King that is often portrayed.

Rarely do we find men who willingly engage in hard, solid thinking. There is an almost universal quest for easy answers and half-baked solutions. Nothing pains some people more than having to think.