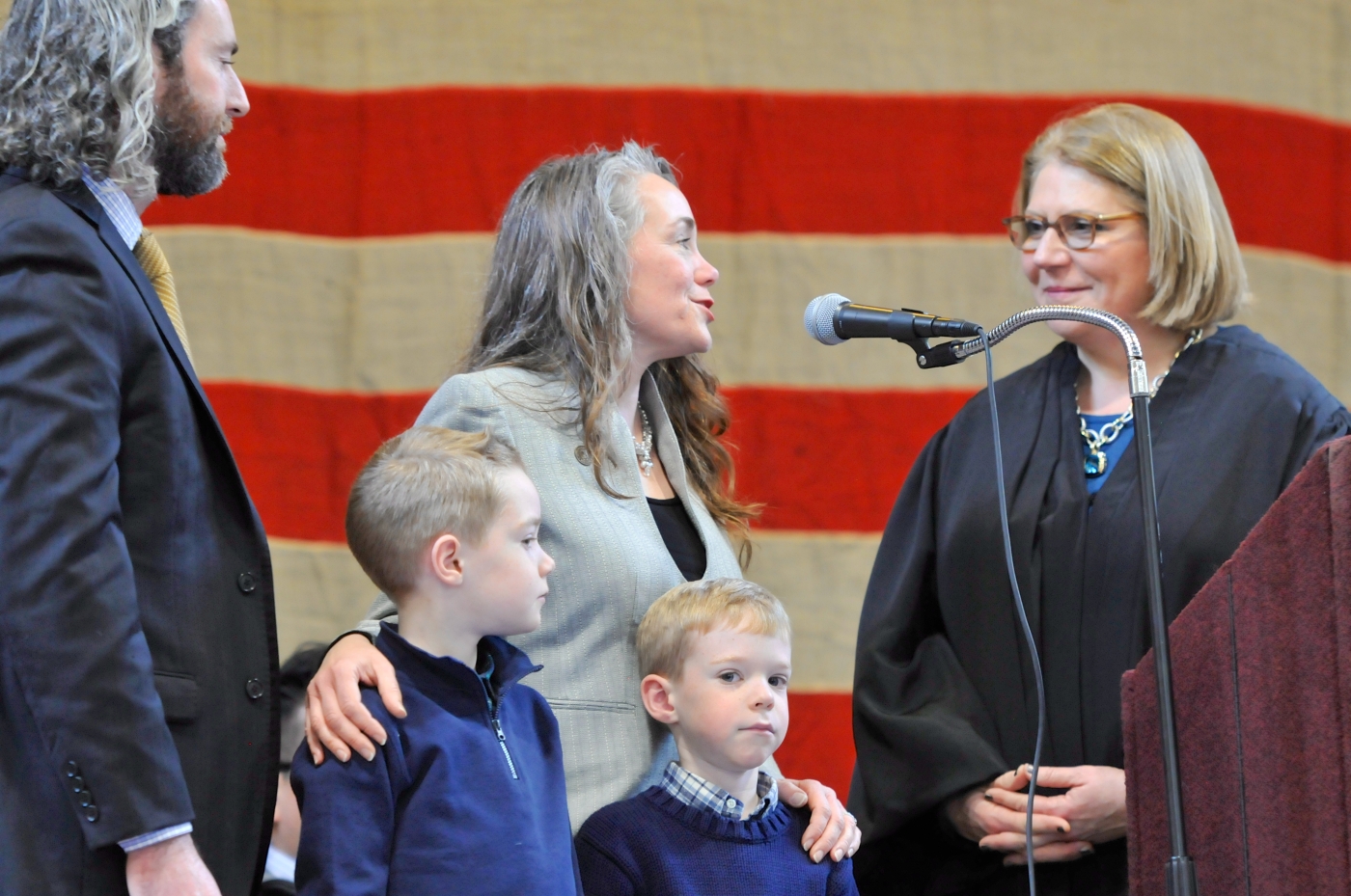 Yesterday was a pretty terrific day. It was wonderful to share it with so many friends, supporters and Ossining community members. Below is my speech as written. There were only a few minor variations when I delivered it—most notably my inability to thank my husband and children without getting choked up.

Happy new year Ossining! It is a new day, a new year, and an exciting era for Ossining. But before I say more about my vision for the coming year, please indulge me as I thank some of the people who were instrumental in bringing us to this point.

The accomplishment I am most proud of from 2014, is the incredible number of people who got involved in the democratic process on a local level. Thank you to everyone in this room and throughout our community who worked so hard in last year’s election.

My journey to becoming Mayor of Ossining began and succeeded because of the support and generosity of my husband Eric and my sons Paxton and Levon.

And I want to thank the outstanding professionals in our village government who have remained steadfast in your dedication to your work serving our community, without concern for the political circus often swirling around you.

I also must thank the Ossining Democratic Committee, most especially our Chairwoman Thomasina Laidley-Brown. And I am grateful to many people on this stage who have served, and continue to serve, Ossining through elected office at all levels of government. Your support and mentorship has been invaluable.

Thank you to every one of you who knocked on doors collecting signatures, wrote letters to the editor, and reached out to friends to make sure they showed up on Election Day. Ossining primary election voters showed up at twice rate as voters statewide. People who might otherwise have been content to criticize from the comfort do a Facebook page, instead became engaged in the democratic process in a way they never had before.

And special thanks to the core group of friends and supporters who not only devoted your time and skills to the campaign—when I needed it most, you reminded me of why we began this journey to bring new leadership to Ossining.

Becoming Mayor is not something I take lightly. This was one of the most hard fought local races in quite a while in Ossining, and we all found ourselves at odds with friends and neighbors. The one group of people I have not yet thanked for their role in last year’s election is my opponent and his most ardent supporters. The challenges you posed clarified my vision, deepened my understanding of myself as a leader, and made me a better public servant. I will be a far better mayor thanks to your work. The rebuilding of damaged relationships on the Board of Trustees, and with leaders throughout the community, has already begun.

Today is the day. It’s time to get to work. It’s time for Ossining to lead the way.

Courage in leadership is acknowledging that, yes, this next challenge is going to include an argument, and I’m going to become very good at navigating that conflict. Knowing we have the ability to collaborate with people who disagree, enables us to achieve greater results than if we had avoided tough challenges.

Leadership means not fearing a diversity of opinion. I am confident that my colleagues and I on the Board of Trustees have the ability to listen, consider, and debate ideas and then ultimately discern the wisest path for Ossining.

This board is united in our desire to improve how we communicate. We are committed to a more open government that I believe includes keeping the cameras rolling throughout public meetings, making our website more user-friendly, and establishing a social media policy. A village government that is able to be more accessible and responsive, is essential for empowering residents to actively participate in Ossining’s future success.

Ossining will lead the way in making better use of your tax dollars through efficiency initiatives like LED street lights, energy efficiency upgrades, the municipal solar buying program, and municipal energy aggregation. Some of those improvements are already underway, and there is much more to come.

Most of the issues we face in our village are complex. None more so than development. I have three priorities to address on this front. First, Ossining will lead the way on establishing green building codes among municipalities of our size. We will begin by exploring what is working in other communities, and craft a policy that will encourage construction that is more profitable and sustainable for the developer, attracts high quality retail and residential tenants, and has a lower burden on municipal services.

Second, it is time we implement a Complete Streets Policy, which will make our roadways safer for all users. This policy will encourage practices that impact residents’ health and safety, as well as Ossining’s economic vitality.

Last month I met over brunch with three-dozen local business and community leaders. This group of talented and highly engaged leaders is emblematic of the dedication that Ossining residents have toward strengthening our community. While many of the ideas expressed were not unique to Ossining or to this generation, right now we have a once-in-a-lifetime opportunity as we decide the future for our downtown.

Ossining will lead the way in determining what will be built in the Market Square properties in the heart of our downtown. After 40+ years of parking lots, we must craft a Request for Proposal that invites developers to build what will become the cornerstone of a vibrant and thriving downtown that is uniquely Ossining.

If you were to ask ten residents what they love most about Ossining, you’d get some variations, but nine of those ten people would include on their list “diversity”. And we mean it. Diversity is absolutely one of our greatest strengths. But sometimes it feels like one of our challenges. Ossining is as racially, culturally and socioeconomically diverse as any big city, but we are small enough to feel we all know each other.

I believe not only is it a leader’s job to create a process and a culture that allows people to speak freely, and encourages people to exercise their right to participate in our local government. I believe a leader must learn to recognize conflict as thinking—as an opportunity to consider a new perspective.

If we have the benefit of the diversity of knowledge, experience, and talent that is core to who Ossining is, then the future we create will be vastly better as a result of embracing and learning from our conflicting ideas.

And so fellow proud Ossining residents, my call to you is, help Ossining lead the way. When we disagree, let us learn from each other. We will do great things today that will impact Ossining residents for generations to come.